About Me - The Author of Java Made Easy 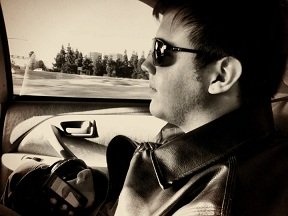 My name is Alberto Pareja-Lecaros, and I love to program in Java.

So about me. I've been using computers since I was four. I remember the good old days before my family's computer had Windows, and I used to work with the black DOS screen to get to the games I liked to play. I also remember the big actual floppy disks that programs used to come in. Good times.

When I was 8 I found a program that let you easily make your own computer games called Klik & Play. I fell in love with this program and started to make a bunch of little games with all of the built in graphics and options it had. It really dumbed down game making to a series of checkmarks and what it calls event handling (sounds complicated, but it wasn't!)

One day I found a book in my local library called Quick Basic for Kids. I opened it up, and I found actual code inside! The best part is that it was written specifically for me, so that it wouldn't be confusing. I immediately checked it out and went home to begin coding.

It was not so easy though. You needed the Quick Basic program editor to actually run the programs. I did not know this at the time, so I used whatever I had available. It didn't work, and I became frustrated and gave up.

Later on, my dad found out about my efforts and actually had the editor I needed. He gave me what I needed to begin running the code I was writing by copying the examples and I watched them run. It was amazing. Here I was, actually getting text to display on the screen! I got the computer to get my keyboard input, and to even play a little game against me. It was an incredibly fun experience.

I outgrew the book quickly. My dad gave me a book of all the commands that exist in Quick Basic, and I experimented on my own, trying to figure out how to use those commands to create more interesting programs. I could make the computer play sounds and even draw animations on the screen.

In high school my basic knowledge of computer programming helped me to develop the mindset I needed to learn more complicated computer languages such as Java. I owe it all to that one book that helped open my eyes.

Yes I did learn to program at a very early age, but the point of my story is not to brag about myself. My point is that with the right learning tool ANYONE can learn to program a computer. The Java programming language is a beginner friendly language, and one that you can learn quickly. With proper wording and extremely clear explanations that do not assume you know how to program, you can learn Java. I don't believe computer programming is out of anyone's grasp, not even to you all who think you have no computer skills.

Again, you do NOT need to know everything there is to know about computers in order to learn programming! What you do need is focus and to apply a small amount of effort and you'll be coding up your first programs in no time.

I've made these tutorials very basic, and even show you how to install the programs you need to get Java to work on your computer so you don't become frustrated as I did back when I was 8. For those who already know how to program and are looking for simple Java programming tutorials, you've still come to the right place. All of my resources are here to help you make your Java learning experience as easy as possible.

But enough about me. Remember this is your resource, so if you have any comments or suggestions, feel free to contact me at any time and I'll try my best to read them. Have fun learning Java and I hope you enjoy the rest of my site!

Leave About Me and go back to Java Made Easy!