What is Java? Isn't it a coffee drink?

Yes, but that's not what we're talking about here. The Java computer language is known as a high level programming language. It was developed by Sun Microsystems in 1995, and was intended for mobile devices to be able to "talk" to each other.

So what is Java used for? The goal of the Java programming language was to make it so that a developer who programmed on one computer could run his/her code on another machine, even if the two machines were nothing alike. With other programming languages, such as C++, the same code is interpreted differently on different machines. Programming on Windows usually meant the program would not work on a Mac. This is not true with Java.

How can Java accomplish this? Java has what is called the Java Virtual Machine. This is literally a virtual computer that starts up that runs the Java programs. Because this virtual machine is the same on all computers that have Java installed, any Java program will work on any of those computers. This interdependency makes Java a fantastic programming language for cross-platform environments (Windows machines, Macs, Linux machines, etc). So what is Java used for then? Quite simply to make it easy to write software that works on any kind of machine!

Java is an object-oriented language. This was a rather old programming paradigm by the time it was released, but a lot of the industry didn't really catch on until after Java's release. Before object oriented programming the standard was procedural programming. This is the style I learned first, and let me just say I am glad that object-oriented exists today. 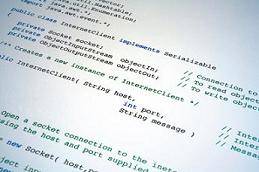 What Java was primarily used for and the original focus of the Java computer language has really been Internet applications, so it is much easier to write a program to work on the web than with most other languages. Javascript, JSP (Java Server Pages), and Java working together can create powerful web applications. Java applets are relatively easy to put up on the web. Of course, you can also use Java to create programs that don't run on the web.

I think that Java is a great computer language to learn. I am certainly glad I learned it, and I know for a fact that Java is THE language to learn if you're just starting out. There's just too much potential with Java that is so easy to unlock. It's no wonder high schools have switched to Java as their language of choice when teaching computer science!

Leave What Is Java and return to Java Made Easy!