We're going to make a fun Java game that you can play yourself against the computer!

The game is called 21 Sticks (known also as 21 game), and we will use everything we learned in Java for Beginners in order to make this Java game.

The rules of our game are simple. You start with 21 sticks, and two players take turns either taking one or two sticks. The player who takes the last stick loses. Simple right?

The first thing we want to do to start our fun Java game example is figure out all of the things we need to keep track of. This is always a good idea before you start programming because it helps to create a programming plan. Imagine what would happen if no one planned before building a bridge!

We also need to figure out how we will get the user input. A Java Scanner will do just fine for us. We need to ask the user two things: whether or not he/she would like to go first, and how many sticks he/she wants to pick up. Because mixing Scanners can be tricky, we'll create two scanners instead. We'll also need to keep track of the choices the player picks. For going first, we'll store that as a String. For the number of sticks, we'll use an int (integer).

Again, it's best to define all of your variables at the beginning of the program, so we'll keep all of these in mind. In the end this will better help us to code up our short but fun Java game!

How is the 21 game played? Well, in this case players take turns taking sticks until there are no more sticks. Notice the word until. This usually means we are dealing with a while loop. The taking turns depends on who goes first, the player or the computer. Since it depends on who is first, we'll probably need an if statement to figure out who's first.

How does a player lose? Only if the player takes the last stick. Oh wait, that means we need more if's to take care of that.

Now it's time to start programming our fun Java game example. Create a new Java file called TwentyOneSticks and create the main method. If you've forgotten how to do that, take a look at Making Your First Program to see how it was done with Hello World.

Let's go back to the list of variables we absolutely needed to have. First, we needed to keep track of the number of sticks. Let's write that:

Let's also create the two Scanners we'll need in order to get both who goes first and the number of sticks from the user:

That should be good for now. Let's figure out what happens once the player has decided to go first or not. We know that our Java game now has to keep going until the last stick has been taken. This means the rest of our code is going to be inside of a loop, specifically a while loop.

Now, either the computer will make a move first or the player will, depending on who was chosen to go first by the player. So, we'll need an if-else statement. If the player goes first, we'll ask the player to pick sticks, and then the computer, otherwise it will be the other way around. So now, our code should look like this:

You can test to see if this part of our Java game works by adding in a System.out.println("Player goes first"); inside of the if, and System.out.println("Computer goes first"); inside the else. Note that your code will not ever stop running! Why? Because remember the while loop we added; it will only stop looping when the number of sticks is equal to or less than zero!

Let's create the 21 game for when the player goes first. We won't worry about the other way around yet, since if we can do it this way, making the game go the other way is easy!

Inside the else part, we want to make the computer take its turn. Here we'll use some simple artificial intelligence in order to make the computer decide how many sticks to take. Our computer's logic will be simple: if taking two sticks makes it lose the game, or if taking two sticks leaves some multiple of three left, then only take one, otherwise take two. It's not so important to understand this logic, but we'd like the computer not to play too poorly else our small but fun Java game may not be as much well, fun. You can try out the game for yourself later to see if you think the computer is too easy.

You can now try out your fun Java game! Make sure to type in y or Y so that you take your turn first. We haven't coded the game to work the other way yet!

One last thing we should do before working on the computer going first: we need to make sure the player can only take away one or two sticks. If you look at the code, what will happen if they decide they want 20 sticks? Nothing is stopping the player from doing so! This will ruin our Java game to no end! To prevent this, we'll do some simple error checking and handling. If the player types a number less than one, we'll assume he or she meant one. If he or she types in a number greater than two, we'll assume it to be two. 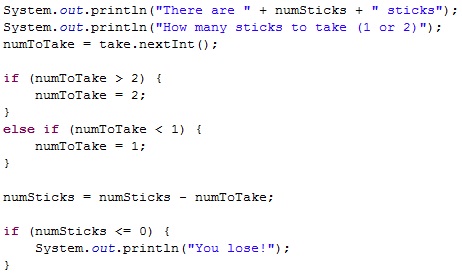 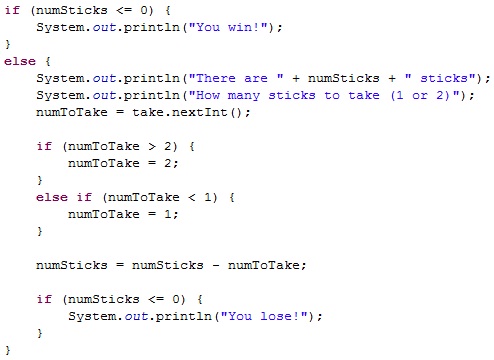 Your little, fun Java game is now complete! 21 Sticks is a great logic game to play, and I hope that the logic for programming it proved fun as well! Here is the completed code for you to check your code with. You'll notice that the game logic is not very long. It really is a quick little game to make!

I hope you enjoyed this short but fun Java game example. There will be many more games like the 21 Game and other examples for you to practice your Java programming skills, so stay tuned!