As has been discussed before, all Java objects have a constructor, even if you don't specifically code it. The same as not writing a constructor at all would be this:

Inside of that class is the default constructor. Again, constructors must be the name of the class, and the constructor must not have a return type at all.

Constructors may contain code that is run when the object is created. It is sort of like setup code that you want done so the object is ready for what it's supposed to do.

Here's an example of what I'm talking about: 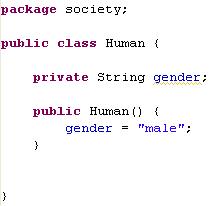 You no longer HAVE to create an object and then fill the initial data with setters. You can skip the setters initially by using the constructor to set your data up. This doesn't mean setters are useless, because your data can change. However, this is just a way of making sure you don't create objects such as dogs initially with no legs. That's just an example of course.

Here's an example of overloading the default constructor: 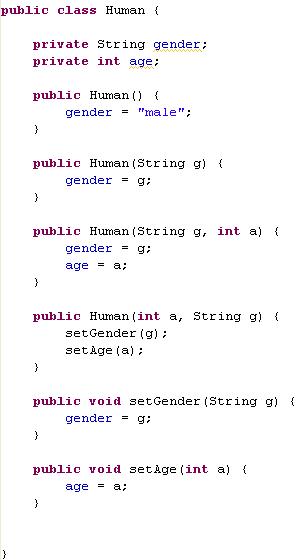 Java can still tell the difference between all of those different constructors because the data that has to be given to them are all different, either by amount or by type. You'll also notice that all of the constructors set their data in slightly different ways. In general though, I prefer to call the setters from inside the constructor, like in the 3rd constructor in the example above. This way you're not writing duplicate code.

If you couldn't tell, this was part 3 of the Java objects tutorial. You now have all the information you need to create sophisticated objects.

Objects are the biggest component of object oriented programming (it's called object oriented for a reason), and I highly recommend mastering the whole process of creating a Java object. It's critical to know for just about every object oriented language I can think of.

In the next tutorial we'll use Java packages to organize our programs when they become seemingly too large to manage. Happy coding!

If you have any questions, comments, or concerns about this tutorial, feel free to contact us.

Leave The Java Constructor and return to Intermediate Java Tutorials

Leave The Java Constructor and return to Java Made Easy!